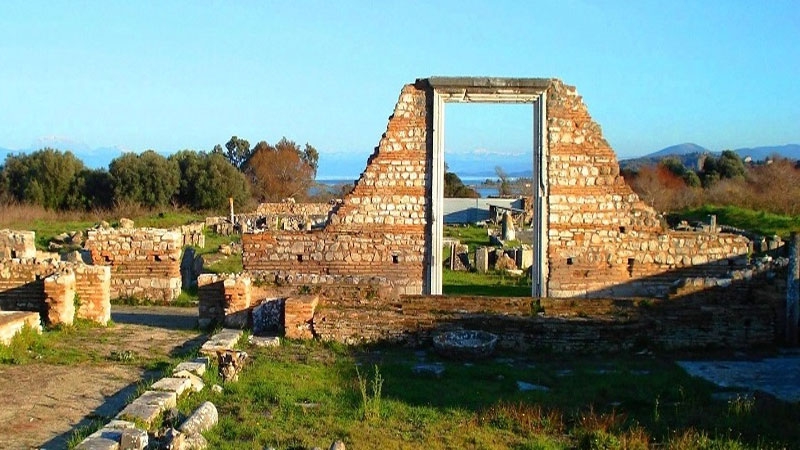 Numerous monuments prove a 3.000 year old historic inheritance, which confirms the portrayal of the Prefecture of Preveza as a crossroad of civilizations.

Zaloggo:
On December 16th , 1803 after the fall of Souli to the Turks, a group of 63 women, many with children and babies, chose to jump to their death from the steep cliffs rather than become enslaved by the Turkish Army. An impressive sculpture of the artist Georgios Zoggolopoulos and the architect P. Karantinos (1961) is placed atop the steep rock, illustrating the dance of these women to death and symbolizing their sacrifice. In order to admire this monument up close you need to climb up 412 steps that start from the Monastery of Agios Dimitrios (29 km northwest of Preveza).

Nikopolis:
The ancient city of Nikopolis lies about 6 kilometers north of Preveza. It was built on 31 BC from Octavious, after his triumph in the Battle of Aktio over Antonios and Cleopatra and reflected the power of the Roman Emperor and the establishment of the Roman Rule.The new Archeological Museum of Nikopolis is located in the entrance of the city of Preveza and opened for the public in the summer of 2009

Kassopi:
Twenty eight kilometers northwest of Preveza, in the slopes of Zaloggo, lie the remains of the ancient city of Kassopi, founded in the 4th century BC, from the local homonymous clan.

Orraon:
This is the ancient city of Molossoi, established in the 4th century BC and deserted in the 1st century BC, after the foundation of Nikopolis. Fortified with a nice wall reinforced by square towers, it hosts some well preserved mansions with large windows. The panoramic view from the ancient town of Orraon reveals the importance of its position, since from here the biggest part of Arta was inspected and controlled.

The Hotel Iliovasilema is open all year round, which makes it suitable for winter holidays, too.

This email address is being protected from spambots. You need JavaScript enabled to view it.

Our business complies with the European Parliament's Privacy Regulation 2016/679.